Yesterday we talked a little about Google PageRank, and that got us wondering, when was the last time that it had actually been updated? Historically, it’s been updated every few months, but as Matt Cutts said yesterday, Google is going to be updating it less and less. It turns out, we are already in the middle of an historic PageRank update drought. Let’s take a look at how long it’s been with some hard dates.

Well, we did a little research, and came up with the following schedule of updates (from Hobo Web) ranked from most to least recent:

As you can see, there hasn’t been a proper update since February. That’s nearly eight entire months with no upgrade to the PageRank ratings. Logic dictates that we’ll see one any day now, but logic is a notoriously fickle mistress. Check out this exchange between an SEO and Matt Cutts: 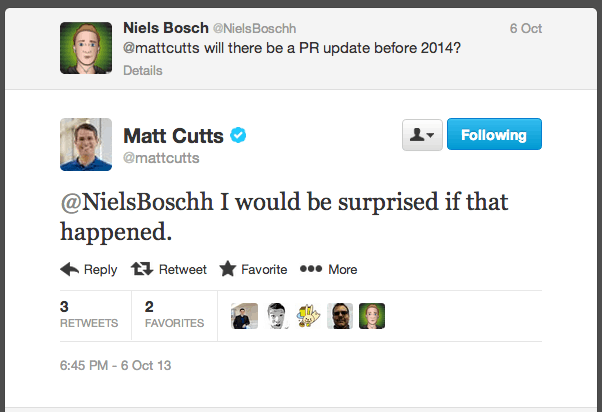 That’s right, we’re looking at no PageRank update until next year. This means that there will be nearly a year between each PageRank update. Google said they were going to care less about PageRank, and apparently they really mean it.